A Quick Guide to Manuka Honey

What is Mãnuka honey?
Mãnuka honey is a type of medicinal honey that is derived from the pollen of the Mãnuka tree (Leptospermum scoparium) which is a type of tea tree that is native to New Zealand.

Why is it so expensive?
The flowers of the Mãnuka tree only bloom for a very short time, between 2-6 weeks per year. They are also sensitive to climate conditions and often grow in very remote places. Some commercial brands claim they have to use helicopters to access remote hives!

What is the difference between UMF and MGO?

UMF stands for Unique Mãnuka Factor and measures:
● Methylglyoxal (MGO / MG)
● Leptosperin - indicates that the honey comes from the Mãnuka plant
● Dihydroxyacetone (DHA) - in the nectar of the Mãnuka flower
● Non-peroxide activity (NPA)

Higher grades will have a darker colour and a more distinctive taste.

What Health Conditions May Benefit From Mãnuka Honey?
Mãnuka honey has been found to have antioxidant, antimicrobial and anti-proliferative abilities and has been studied in relation to wound healing, epithelial regeneration and ulcers. Other studies have shown that Mãnuka honey can inhibit the process of carcinogenesis and the progression of cancer cells.

Mãnuka honey has a unique ability to disperse and kill bacteria living in biofilms, which is part of the reason it is so effective for wound healing.

Perhaps the most promising research has been in relation to antibiotic-resistant organisms. Antibiotic resistance is on the rise. In 2019, the UN Ad hoc Interagency Coordinating Group on Antimicrobial Resistance, released a report that stated drug-resistant diseases could cause 10 million deaths each year by 2050 and damage to the economy similar to the 2008-2009 global financial crisis. By 2030, antimicrobial resistance could force up to 24 million people into extreme poverty.

Research has shown, for example, that Mãnuka honey, as well as methylglyoxal (MGO) in isolation, appears to increase the sensitivity of methicillin-resistant Staphylococcus aureus (MRSA) to linezolid.

In general, studies have found that Mãnuka honey works best in conjunction with other antimicrobial agents and results were mixed about which therapeutic strength was most effective for different pathogens.

More importantly, there does not appear to be any record of bacterial resistance to honey, despite its extensive history of use! This is possibly due to the complex mixture of methylglyoxal and other components in Mãnuka honey.

Which therapeutic grade should I use for my condition?
In general, it is thought that a UMF rating of 10+ (MGO 263) is the minimum strength required for
therapeutic use.

At Sunnybrook we have an amazing range of Mãnuka honey products. Find out more about them here. 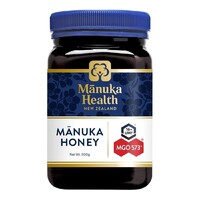